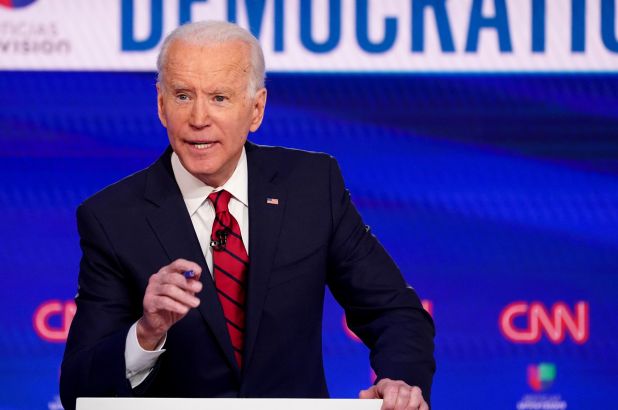 Recently a hashtag concerning Joe Biden has surfaced echoing a popular mantra in our society. #IBelieveTaraReade is making the rounds on social media and possibly growing legs, the question is when will the Me Too movement catch on?

Tara Reade is former staff assistant for Joe Biden when he was a Senator in 1993. Lately she has been giving a graphic account of sexual assault involving the 2020 presidential candidate to any media outlet who will listen.

If one were to search any of the varieties of Tara Reade hashtags one finds there are already a lot of Bernie supporters jumping on this grassroots trend (taking into account that some on any side may be fake). They’re still holding steady with the Me Too mantra of “I Believe Women” and are using Biden’s own words against him because he as well has been quoted saying to the Washington Post, “For a woman to come forward in the glaring lights of focus, nationally, you’ve got to start off with the presumption that at least the essence of what she’s talking about is real, whether or not she forgets facts, whether or not it’s been made worse or better over time.” The movement doesn’t leave room for much else, only I Believe, that’s it. If there is more  they’re not very good at articulating it.

The consequence of the Me Too movement’s I-believe-women-unconditionally attitude was painfully obvious from the start and predictably it seems it may come back to bite them. It was just a matter of time before a high profile Democrat would be accused of sexual misconduct, decades after the fact, with no physical evidence and very little or no eyewitness evidence. Literally one persons word against the other, and a compilation of the accused persons dubious character traits; like shoulder rubbing and hair sniffing for example.  So what is the portion of the Me Too crowd who has thrown their support behind Biden to do now?  Will they believe Tara Reade unconditionally and throw Biden to the curb? Some of them may, but not a peep from any high profile supporters so far. And many rank and file supporters have actually accused her of being a Russian asset, and have accused Bernie supporters of blowing this up for political gain. Sound familiar?

Bernie supporters aren’t handling this any better however. They’re forcefully using the Me Too mantra of unconditional belief to destroy a political rival only this time it’s a rival in their own party.  All it takes is an accusation. What will it take for them to realize this is a two-way street? What will they do when a person who they are giving their full-throated support to is accused in such a way? Will they throw their guy away or will they call it a political hit job? It would be no surprise if they chose the latter. That’s politics for you, what’s good for the goose is never the same for the gander is it?

Trump supporters are also getting in on the act, rubbing Me Too in everyone’s face who doesn’t viciously attack Joe Biden. Another reason the extreme and unfair stand of the movement is self defeating. They should have seen this coming, after all it was truly a matter of time that their integrity would be tested on their own turf. Bernie supporters and hard line Me Too advocates would be smart to take note. Of course if Trump supporters had any shame they would sit this one out since their guy, the pussy grabber has been accused by more than 50 women of sexual misconduct and caught red handed paying off a porn star with whom he cheated on his pregnant wife. Talk about having not a square inch of real estate to stand on.

The point is this, the Me Too movement isn’t wrong on merit. Women should be taken seriously when alleging sexual misconduct, rape, abuse, assault, harassment, at home or in the work place. Women in general deserve for Tara Reade to be taken seriously, and Reade deserves to have an impartial and thorough investigation on the strength of only her word. But that’s all ones word can get. The rest has to come with an investigation that either uncovers proof of misconduct or not.

Either way however, at this point the Me Too movement is largely silent on this one. No mainstream outrage. Not yet.